I have read several forums regarding the disconnecting the Arduino power from the Lithium Ion battery by itself (measuring the battery voltage and when the low limit is reached the Arduino signal turns off itself).

The protection circuit prevents the LiIon/LiPo cell from being over charged (bad things happen when the cell is pushed past 4.3V), under charged (the cell can be harmed if pulled below about 2.8V), and short-circuit (shorting the positive and negative terminals together). If any of these triggers occur, the protection circuit very quickly disconnects the cell from the terminals. If you discharge it under a typical load to the 2.5V-2.7V low-voltage cut-off, the cell will usually recover to >3.0V after a few minutes at rest.
If it does not recover to >3.0V, it will have suffered some damage, depending on how low its voltage is at rest. The key will be to recharge it as soon as possible, as the longer it spends in a fully-discharged state, the more it will deteriorate.

The best policy of all is never to let Li-Ion cells get that low. You can top them up as often as you like.

I have created a circuit that based on the signal (n my case from Arduino board), the power is turned off to 0 power drain from the battery. I also made a ATtiny13A circuit that controls the switch on/off of the rest of the circuit (Arduino project).

I used different approach than stated in several forums and created overall schematic of Arduino that measure the battery voltage and turn it off when it reaches the low voltage limit. The stand alone circuit that can be reused by projects is depicted bellow. So step by step assembling of the board by soldering the circuit: The DW01 battery protection IC is designed to protect lithium-ion/polymer battery from damage or degrading the lifetime due to overcharge, overdischarge, and/or overcurrent for one-cell lithium-ion/polymer battery powered systems. Most of such protection circuits have Overdischarge Detection
Voltage [VODP] at 2.4V. I have found only one IC FS312F-G that has VODP at 2.9V. The advantage of custom DIY protection IC is that it can be controlled from arduino, so you can set the VODP at your voltage level.

I usually use 3,3V under power and 3.5V rest voltage threshold levels in my projects.

TBD – this post will be updated describing the rest voltage and voltage under power.
link

Other useful tips on this topic:

ESP8266 WiFiManager EEPROM My next addition to previous projects battery-wifi-iot-temp-hum-soil-moisture-sensors and battery-powered-esp8266-iot-logger is to make wifi configuration smooth and fast.

My new project consists of HW with cost under 20€. It is able to accurately measure electric power consumption and sends data via WiFi. Great source of knowledge is openenergymonitor.org which includes also Arduino library.

Program ATtiny13A via Arduino board 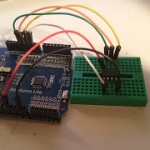 Programming ATtiny micro-controller is quite easy if you have all the needed information in one place. That is the reason to put all needed files, hints in one post so next time I will need it,[…]