My next addition to previous projects battery-wifi-iot-temp-hum-soil-moisture-sensors and battery-powered-esp8266-iot-logger is to make wifi configuration smooth and fast.

I have created 2 prototypes, that utilizes all my sensors, wifimanager, influxDB storage and low power consuption:

If successfully connected to the access point, the structure is stored in EEPROM.

On every start, ESP tries to start with the stored values:

Main libs used in the sketch: I successfully run DHT22 battery ESP8266 temperature/humidity IoT sensor so my next project is a simple IoT Door Sensor. It is up and running and sending a simple event to my HTTP server via wifi[…] 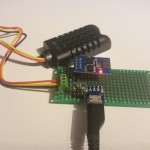 I learned how to program ESP8266 so I created my first temperature IoT ESP8266 project. I used DHT22 as a temperature and humidity sensor and also I did some testing of power consumption using LIGHT SLEEP[…]

I have read several posts to reduce the power consumption of micro-controllers and learned that the althought you can minimize the power consuption of arduino, usually you have other sensors/chips that cosume more power then[…]