Since my latest ESP8266 temperature humidity IoT logger project is up and running I have decided to cut the last wire – power. There are more approaches how to make ESP8266 running on a battery, but why not to have a unique one… 😎
The idea is to use only 5µA AtTiny13A (5 microA 2-3V) during the idle time to decouple all other components from batteries! So really 0 power usage from all other components (power regulator, DHT22 sensor,..), since the more components the more idle power consumption. All other circuits should wake up only during limited time and then again turn off.

I have combined knowledge mostly from two my previous projects:

This is my latest version of the wiring that I used:

My AtTiny13A programmer and ESP01 programmer from my previous posts helped me to easilly program ESP8266 and AtTiny13A:

The project is up and running. I used double AA batteries. Sending data every ~20 minutes.:

Logs from my server:

I will do real battery life measurements and I will compare different batteries as power source (AA, AAA, CR2032,..). IoT data logger is configured to send data via wifi every 20 minutes for the test. This post will be continued!

Problems I had to solve:

Check project version with only SI7021 temperature and humidity sensor with 3xIkea AA batteries and with ATtiny85 for battery level measurements.
After 50 days the interim batteries voltage level is 4.08V with WiFi transferring and 4.34V (1.44V each!) during sleep mode. The project is still up and running after 3171 measured and transferred data:

The project is up and running after 21 weeks.

Bellow is a widget combination of all of my IoT data from I2C on my cubieboard, ESP8266 on battery, ESP8266 on USB and also Yahoo data. Also check my another ESP8266 battery IoT door sensor project.

I have several IoT sensors at home and now I came to the point that I would like to introduce some solid platform for storing sensor data and visualizing them. This post summarize all platforms[…] 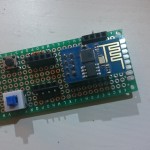 I was inspired by several DIY projects. The ESP8266 WiFi 802.11 b/g/n Module is a self contained SOC with integrated TCP/IP protocol stack that can give any microcontroller access to your WiFi network. The ESP8266[…]

My new project consists of HW with cost under 20€. It is able to accurately measure electric power consumption and sends data via WiFi. Great source of knowledge is openenergymonitor.org which includes also Arduino library.